"Upper" Limits The Value of Caffeine in Weight-loss 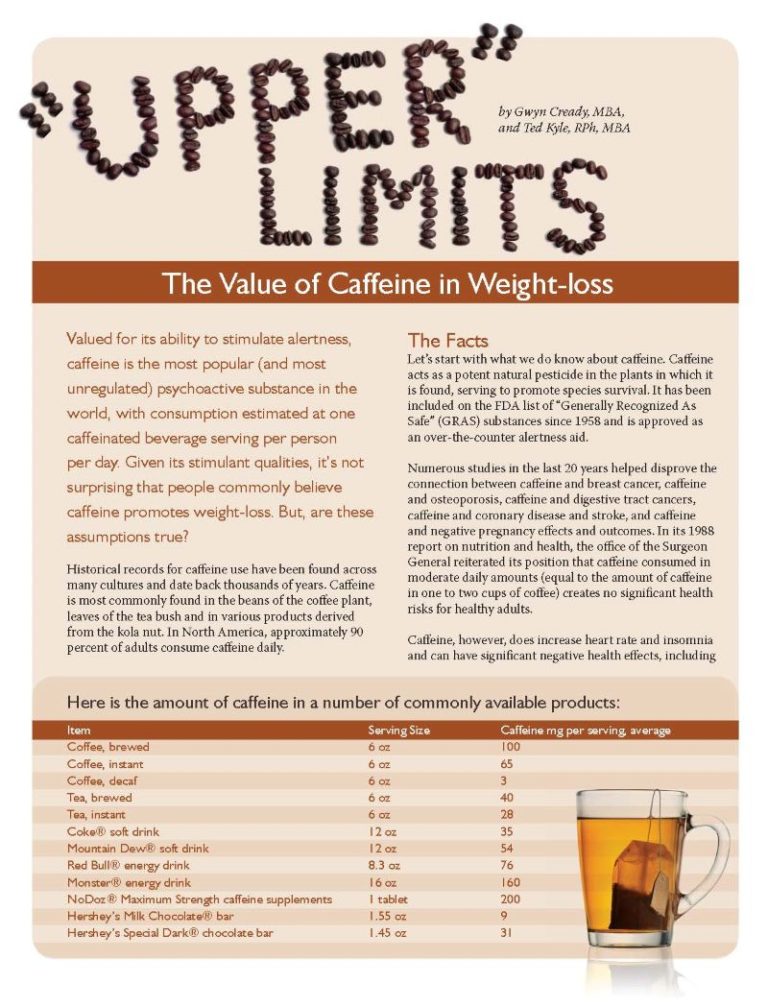 Valued for its ability to stimulate alertness, caffeine is the most popular (and most unregulated) psychoactive substance in the world, with consumption estimated at one caffeinated beverage serving per person per day. Given its stimulant qualities, it’s not surprising that people commonly believe caffeine promotes weight-loss. But, are these assumptions true?

Historical records for caffeine use have been found across many cultures and date back thousands of years. Caffeine is most commonly found in the beans of the coffee plant, leaves of the tea bush and in various products derived from the kola nut. In North America, approximately 90 percent of adults consume caffeine daily.

Here is the amount of caffeine in a number of commonly available products:

Let’s start with what we do know about caffeine. Caffeine acts as a potent natural pesticide in the plants in which it is found, serving to promote species survival. It has been included on the FDA list of “Generally Recognized As Safe” (GRAS) substances since 1958 and is approved as an over-the-counter alertness aid.

Numerous studies in the last 20 years helped disprove the connection between caffeine and breast cancer, caffeine and osteoporosis, caffeine and digestive tract cancers, caffeine and coronary disease and stroke, and caffeine and negative pregnancy effects and outcomes. In its 1988 report on nutrition and health, the office of the Surgeon General reiterated its position that caffeine consumed in moderate daily amounts (equal to the amount of caffeine in one to two cups of coffee) creates no significant health risks for healthy adults.

Caffeine, however, does increase heart rate and insomnia and can have significant negative health effects, including death, if taken in too high of a dose. Also, because it is habit-forming, caffeine leads to unpleasant withdrawal symptoms such as headache, grogginess and irritability.

Caffeine’s reputation as a weight-loss aid comes from its status as a stimulant and a substance that enhances physical performance. A 1979 study showed a 7 percent increase in distance cycled over two hours among subjects who consumed caffeine versus those who did not. In another study among trained runners, those who consumed caffeine showed a 44 percent increase in race-pace endurance compared to those who did not.

Some research has suggested that caffeine may stimulate thermogenesis – a scientific name for the way your body generates heat and energy from the calories in your food; but nutrition experts say that this effect probably isn’t enough to produce significant weight-loss. Caffeine may also reduce your desire to eat for a brief time, but again, there’s no good evidence over the long-term that this effect leads to weight-loss. To date, no conclusive clinical studies have been done to determine the long-term effect of caffeine on weight loss, and the smaller studies that have been done show a lot of variability in the outcomes.

At present, even though caffeine may have a small effect on energy and appetite that could lead to some positive short-term effects on your energy balance, there’s no evidence that it can actually cause you to lose weight. On the other side of the equation, excessive caffeine consumption clearly can be harmful.

One must also consider the known risks represented by other performance-enhancing products, which may be combined with caffeine in dietary supplements promoted for weight-loss. Ephedra, for example, is an ergogenic whose side effects include heart attack, stroke and death. It was banned by the FDA in 2004. In November 2011, the FDA, after a year-long review, told the manufacturers of seven caffeinated alcohol drinks that their products pose a public health concern and cannot stay on the market in current form. Other dietary supplement weight-loss aids such as bitter orange, capsicum and ginger make claims about energy and/or weight-loss, but have not been reviewed or approved by the FDA.

When you start to look deeper, you will find other research that has shown that consuming caffeine throughout the day may actually result in weight gain, because caffeine affects cravings for food. Drinking caffeinated beverages, for example, may prompt you to eat more snacks and larger meals.

Caffeine raises the stress hormone cortisol, which tells your body to increase its energy stores and also raises heart rate and blood pressure. Resulting stress can also interfere with your sense of well-being and can trigger emotional eating or a desire for comfort food. In addition, drinking caffeine can prompt hypoglycemia – low blood sugar caused by a drop in levels of blood glucose – which also increases your appetite and causes your body to crave higher calorie foods. The more caffeine you consume, the more your body urges you to eat the foods that yield glucose, such as starches, sweets, fruit and milk.

Caffeine also contributes to insulin resistance, when glucose and insulin build up in the blood. Since insulin is a metabolism hormone affecting every cell in the body, it plays a role in controlling weight as it regulates blood sugar, controls the storage of fat and affects appetite control. Too much insulin can result in food being stored as fat and in protein changing into sugar and fat.

Another condition related to insulin resistance is insomnia and sleep deprivation, both of which can be caused by consuming caffeine. Not getting enough sleep has been shown to increase levels of a hunger hormone and decreases levels of a hormone the makes you feel full. Not surprising, the effects may lead to overeating and weight gain.

If you’re getting the idea that caffeine can have lots of different effects on your weight, you’re on the right track. And this is why people have been unable to prove that caffeine causes weight-loss.

While the chemistry of caffeine is clearly not simple, the evidence for caffeine in weight-loss is pretty weak when the potential for weight gain is considered. In short, if you indulge in a cup or two of coffee, tea or a caffeinated soft drink every day, enjoy; but don’t count on seeing any positive effect on your bathroom scale. And if you don’t really like the caffeine, you might be better off without it.

About the Authors:
Gwyn Cready, MBA, is a communications consultant with more than 20 years of healthcare policy and brand marketing expertise as well as an award-winning romance novelist.