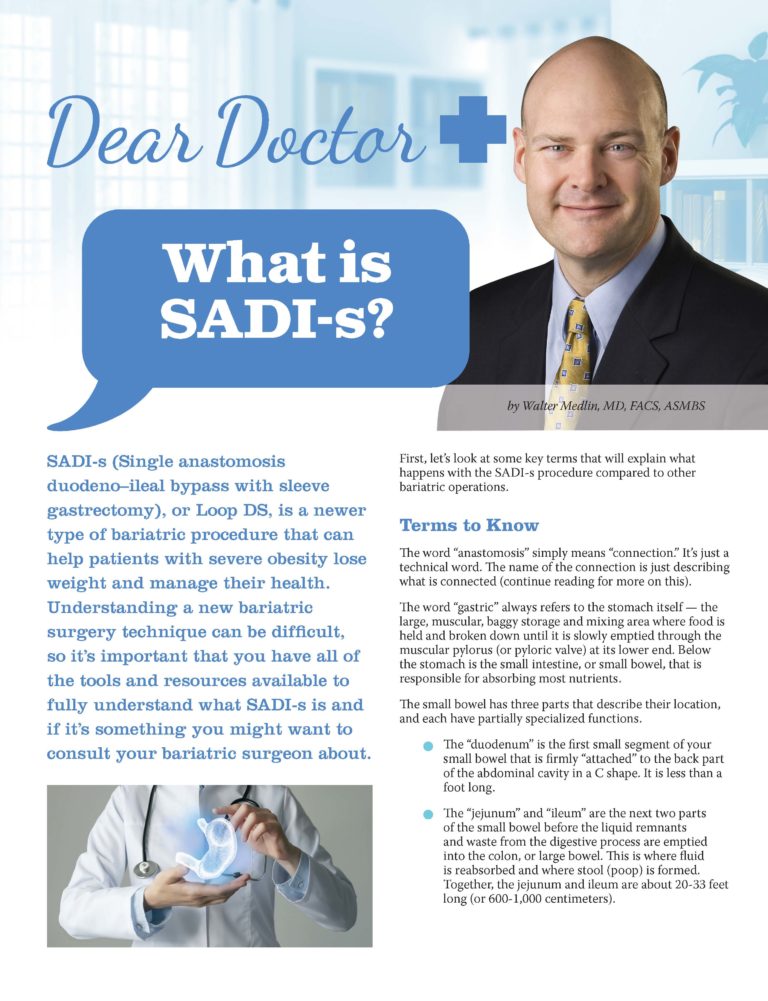 SADI-s (Single anastomosis duodeno–ileal bypass with sleeve gastrectomy), or Loop DS, is a newer type of bariatric procedure that can help patients with severe obesity lose weight and manage their health. Understanding a new bariatric surgery technique can be difficult, so it’s important that you have all of the tools and resources available to fully understand what SADI-s is and if it’s something you might want to consult your bariatric surgeon about.

First, let’s look at some key terms that will explain what happens with the SADI-s procedure compared to other bariatric operations.

The word “anastomosis” simply means “connection.” It’s just a technical word. The name of the connection is just describing what is connected (continue reading for more on this).

The word “gastric” always refers to the stomach itself — the large, muscular, baggy storage and mixing area where food is held and broken down until it is slowly emptied through the muscular pylorus (or pyloric valve) at its lower end. Below the stomach is the small intestine, or small bowel, that is responsible for absorbing most nutrients.

The small bowel has three parts that describe their location, and each have partially specialized functions.

What Does Surgery Actually Do?

Almost every weight-loss operation modifies the stomach in some way. The main goal of bariatric surgery is to alter the hunger and fullness signals to your brain. Any type of bypass operation alters the stomach by causing food to “jump around” a segment of the small bowel, resulting in further changes to the hunger signals. No current operation removes the small bowel; they just alter how much of the bowel gets food. The parts of the bowel that are bypassed will still function and aid the digestive process. No current operation makes any direct change to the large bowel (colon).

The two main differences between bypass operations are where the connection is made and how much of the small bowel will see food.

The RYGB/Gastric Bypass (or Roux en Y gastric bypass/RYGB) and OAGB/Mini/One Anastomosis Gastric Bypass both connect the stomach directly to the jejunal part of the small bowel. This is called the gastro-jejunal anastomosis/gastrojejunostomy.

Both operations divide the stomach into an upper and lower section. The upper part is the gastric pouch, where food goes on its way to the small intestine. When patients eat a meal, not much food will stay in the pouch for long. However, this varies by patient, and it’s not clear what role this plays in weight-loss. The lower part of the stomach is the gastric remnant, which no longer sees food ever again. The RYGB makes a very small pouch to limit acid and reduce the risk of ulcers. The OAGB removes the fundus part of the stomach while shaping the connection point.

Duodenal Switch operations (including SADI-s) do not divide the stomach into upper and lower parts. Instead, they create a narrow sleeve-shaped stomach by removing the outer “greater curvature” part, including the distinctive fundus (see illustration). Food still goes through the pylorus into the first inch or so of the duodenum. The DS operations all divide the duodenum very close below the pylorus, and connect into the lower part of the small bowel, creating a Duodeno-Ileostomy, or Duodeno-Ileal anastomosis. The original version is still often performed, and divides the upstream ileum to reconnect it further downstream on the lower ileum (Ileo-ileostomy, or Ileo-ileal anastomosis).

How Does Limb Length Matter?

In general, the shorter the amount of bowel that sees food (total alimentary limb length/TALL), the better the weight-loss results. However, it also increases the risk of diarrhea, gas and malnutrition. Those side effects are occasionally from calories, but are more often from minerals and vitamins that can lead to anemia and a higher risk of bone fractures/osteoporosis. Very rarely do side effects include vision issues with Vitamin A, bleeding issues with Vitamin K, nerve/brain problems or others.

In most Gastric Bypass operations, the amount of small bowel “in use” is 90%, though a few centers do a long limb version that leaves 50-60% in use. In Duodenal Switch operations, it was common early on to leave only 20-30% “in use.” Now, the most common is 30-40% use (250-350 cm) to allow for better vitamin/mineral absorption and to minimize changes in bowel movement. This adjustment does not seem to affect overall weight-loss much at all.

Why Have Approaches Changed?

Side effects of RYGB gastric bypass are often severe and sudden, such as ulcer or bowel obstruction. More patients also experience weight regain at 5-15 years than we had hoped.

The Sleeve Gastrectomy (or Vertical Sleeve Gastrectomy/VSG) is simply the upper part of a DS or SADI-s. The duodenum is not divided, and there is no bypass. All food goes through the entire small bowel. The Sleeve was originally used as a partial step for sicker or heavier patients to plan a later stage for the lower part of DS/SADI-s, but it became a stand-alone procedure for many. It has become more popular now than RYGB, but it’s not strong enough in the long term for about one-fifth of patients.

The most common side effects of any bypass/bowel shortening operations are challenges with vitamin absorption, loose bowel movements (dumping), blockages (small bowel obstructions) from an internal hernia or a band of scar that the bowel twists around, or from telescoping (intussusception) at the connection of a Roux en Y (end to side) technique. Significant scarring is much less common today now that small incision laparoscopy is almost always used. Daily diarrhea is rare, but does occur in a small group of patients. Occasional diarrhea is usually easily treated by avoiding certain foods. It can also be the result of Irritable Bowel Syndrome (IBS) that the patient had before surgery.

Surgeons are always cautious with “change” for good reason. However, SADI-s has been investigated for more than 10 years. It has fewer complications than RYGB, with better weight-loss and diabetes results. Many surgeons are also inexperienced with dividing the duodenum, which is a difficult area to safely dissect. Additionally, insurance restrictions are known for resisting the adoption of new techniques, despite what the insurers insist. Patients may easily get confused by complex terms and by an ever-evolving field.

The Good Parts of SADI-s

In SADI-s, we almost never see ulcers or bowel obstruction. SADI-s avoids the second anastomosis that can cause real mischief, compared to the original DS, and has very similar weight-loss outcomes.

The shorter length of “in use” small bowel offers a measurable increase in the amount of weight lost, in resistance to weight regain, and in the control of diabetes. Most patients don’t have diarrhea, but a very small number do go back for a brief operation to lengthen the amount of bowel that the food goes through (usually by about 10%, or three feet/one meter).

How Can a Patient and Their Surgeon Decide?

Most surgeons in the U.S. still do not perform SADI-s, and many are very early in their experience. This is a skill that takes time to learn, so many feel safest doing Sleeve Gastrectomies in their early cases that can get upgraded at a later point. The previous weight lost with the Sleeve makes the staged operation much easier, and probably safer. A patient who wants to discuss SADI-s should make sure the surgeon has done a reasonable number of procedures, as it’s not uncommon for surgeons to dismiss all operations that bypass more than a short amount of bowel for resulting in severe diarrhea. That is not the case, but it’s still commonly heard.

We no longer perform primary gastric bypass surgeries in my medical group. My partner, Dan Cottam, MD, is a leader in the field of SADI-s in the United States. The ulcers, bowel obstructions, and variable weight outcomes were unacceptable in our view. We do use it occasionally in very rare, complex cases such as a revision surgery. While there is a modest number of patients who want a later “upgrade” from Sleeve to SADI-s, this is fairly easy and safe in our overall experience. We are also supporters of the new medication classes that can help manage the disease of obesity even after surgery.

Do not look to convert to SADI-s or DS. There is now a good amount of research that shows the TALL approach to adjusting the amount of bowel “in use” is much safer and likely just as effective. The complications mostly came from altering the already divided stomach with no real benefit. We only change the stomach if there is an ongoing problem such as chronic ulcers or fistula, or large and problematic hiatal hernias.

Walter Medlin, MD, FACS, ASMBS, is a bariatric surgeon in Salt Lake City, Utah and Lehi, Utah. He had a Gastric Sleeve in 2008 and enjoyed very good results, but “upgraded” to SADI-s in 2020 after a heart attack to better manage his blood pressure with age. He was slightly unlucky here and had a “limb-lengthening” surgery a year later for an irritable bowel, which was effective. Dr. Medlin now also takes medication to maintain his weight.